Restaurant
Our restaurant serves traditional flavours with a modern twist. Chef Łukasz Oroń prepared a delightful menu, where traditional polish dishes and cuisine from italy, france and other parts of the world can be found. Menu offers meat and vegetarian dishes and self made desserts.

Highest quality of our kitchen is guranteed by selection of fresh local products together with love and passion we put to prepare every dish. 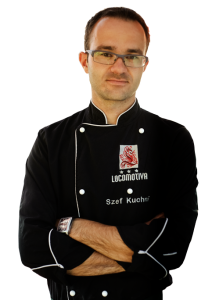 I work in Locomotiva restaurant since 2007, and been head chef since 2009. Since that time I have been constantly developing my knowledge and skills, which best proof of was a prize received by me for “Best Menu” at the prestigious Bussines Food Awards 2013. In my search for culinary perfection I look for both the flavour composition of a dish and how they look. I love seasonal cuisine and local products. New inspiration comes from numerous internships which were held at Adam Chrzastowski or Krzysztof Zurek among others.

I would like to invite you to taste original menu, that was developed together with my deputy Daniel Jurzynski.